Are You Seeking Reliability, Yet Rewarding Failure?

We’ve all heard it, again and again: “What gets measured gets done.” That’s not entirely true, however. In reality, what gets measured tends to get rewarded or punished, which, in turn, results in things getting done. In last week’s issue of The RAM Review, I wrote about overcoming psychological inertia to effect change in an organization. The week before, I focused on managing organizational change from the middle out.

Click The Following Links To Read The Two Referenced Articles

“Organizational Change From The Middle Out”

This week, we continue the discussion by addressing management of rewards to achieve the individual and organizational motivation that’s necessary for organizational change in a manufacturing or process plant. Although I’ve written about the topic of rewards before, including in at least one past feature for The RAM Review, I believe it bears repeating in support of this series of articles on change management.

BACKGROUND ON REWARDS AND MOTIVATION THEORY
Simply stated, rewards drive behaviors. But managing rewards is anything but simple. Rewards can be positive or negative (punishment) and they can be extrinsic or extrinsic. Extrinsic rewards include money, benefits, and other tangible things.

In Abraham Maslow’s famous “hierarchy of needs,” extrinsic rewards are largely responsible for meeting our physiological and safety needs because such rewards provide for our food, shelter, medical care, and other human necessities. Intrinsic needs are much more mercurial. In Maslow’s hierarchy, they’re represented as belonginess, esteem, and self-actualization. Clearly, physiological and safety needs must be met before one can even contemplate the higher order needs in the hierarchy. Understanding Maslow’s hierarchy of needs is essential for understanding the subject of rewards and motivation.

Frederick Hertzberg, another leading figure in the study of rewards and human motivation, devised the “two-factor theory” of human motivation. Hertzberg referred to extrinsic rewards and dissatisfiers and intrinsic rewards as satisfiers. In short, when Hertzberg referred to extrinsic rewards as “dissatisfiers,” what he meant is that if a job fails to satisfy one’s physiological and safety needs, the employee will be dissatisfied with the job. However, to achieve to job satisfaction, the reward system must include the intrinsic “satisfiers” by meeting one’s belongness, esteem, and self-actualization requirements.

Stacy Adams is the last of our trio of giants on the topic of rewards and human motivation. Adams developed “equity theory,” which relates to the perceived fairness of the rewards that drive human behavior. “Perceived” is the word that complicates everything. Every individual possesses an internal, often complex sense of self-worth, and they tend to develop their own sense of the worth of others. But one’s perception of self-worth and the worth of others may or may not be accurate. If someone believes that the extrinsic or intrinsic rewards he or she is receiving don’t match up with perceived value, a perceived equity-conflict situation exists. Moreover, if one believes that a coworker is receiving more extrinsic or intrinsic rewards than he or she perceives to be fair, a perceived equity-conflict also exists.

The first question that one internally asks is, “What’s the probability of success? If the perceived probability is low, it’s a showstopper. Next, the person internally asks, “Will I be extrinsically and intrinsically rewarded for my success?” Then he or she internally asks, “Do the intrinsic and extrinsic rewards justify the effort?” Of course, a perceived equity determination comes into play when assessing the last question, “Are the rewards fair?” If the answers to these internal questions are yes across the board, the loop is closed and motivation to work is reinforced. Now, lets talk about putting this theory to work on the plant floor. 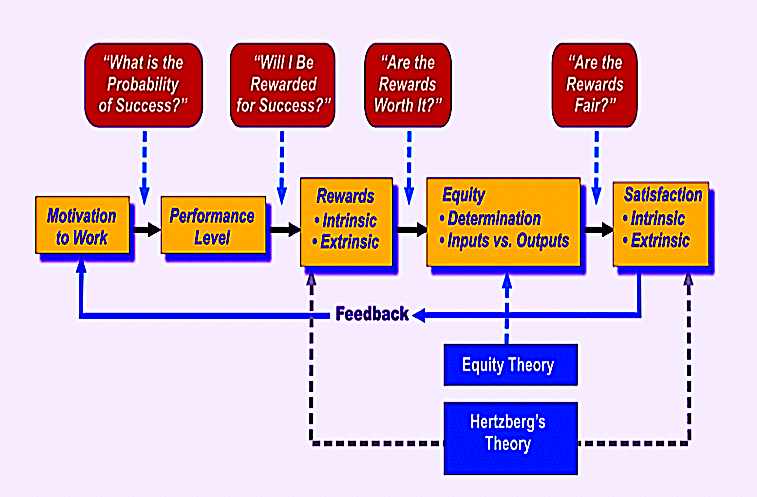 MOST ORGANIZATIONS SEEK RELIABILITY, BUT REWARD FAILURE
On a personal note, the motivation for me to study human motivation and reward theory dates back to about 1994 or 1995. I was working on a consulting project to help a client clean up the oil in its hydraulic plastic-injection-molding machines. Contamination causing the servo-valves to stick and fail was rapidly wearing out the machines axial piston pumps. It was, in retrospect, a fairly simple project. As a part of the solution, I was to train the site’s mechanics and millwrights about contamination-induced wear and failure and how to control it. Everything was going great, that is until the training started.

I had pulled together a deck of slides and assembled a group of about 50 mechanics and millwrights for the training. As I dug into the material, I began getting very angry and aggressive responses from the group. They didn’t like me or anything that I was saying. It was a very intimidating and uncomfortable situation.

During a break, a master millwright pulled me aside and apologized for the group. I asked him, “Why don’t they like me?” He replied, “They don’t dislike you, Drew, but you’re talking about taking away their hunting cabins and fishing boats.” Confused, I asked, “When did I say anything about cabins or boats?” His answer was quick and to the point: “You didn’t,” he said, ‘but for many years, about 30% of their total paycheck has been a byproduct of overtime.” That hit my lock a ton of bricks. The group perceived the contamination-control initiative as an assault on their extrinsic rewards. In essence, my client’s organization was unintentionally and unwittingly reinforcing behaviors that caused failure and compromised operational reliability.

After some study and reflection, it occurred to me that most organizations also reinforce behaviors that produce unreliability with their intrinsic reward systems. Let me explain. Intrinsic rewards are related to belonginess and esteem. I’ve observed that when a machine suffers an unexpected failure, a maintenance technician or team jumps in, gets the plant up and running, and saves the day. Later that day (or another day), the plant manager, operations manager, and other mangers thank the fix-it personnel and hand out congratulatory “atta-boys.” These pats on the back serve the technicians’ intrinsic esteem needs. In many instances, though, a failure in the plant also serves the individuals’ extrinsic needs in the form of overtime pay and their intrinsic needs in the form of congratulatory thank-you proclamations and more pats on the back.

GET REWARDS RIGHT OR LIVE WITH UNRELIABILITY
The dynamics that I described in my client’s plant are deeply entrenched in the culture of many process and manufacturing operations. Sometimes referred to as the “Superman Syndrome,” it survives because team members love failures so they can reap that esteem rewards of recognition. How do we fix it?

On the extrinsic side of the equation, most organizations are legally required to pay overtime pay, if applicable. Nothing, however, stops the organization from implementing an uptime or reliability bonus that declines as a function of overtime dollars paid out. Such a scheme promotes behaviors that encourage proactive equipment care and teamwork. While the extrinsic reward system must be customized for each organization, the building blocks really are simple. The key is to ensure that the personnel in question are financially better off (or at least no worse off) under the new system. Economically, the plant wins in the form of increased production and reduced maintenance costs, and improved health, safety, and environmental performance. The overall approach is quite easy to justify.

An intrinsic-rewards scheme can be more challenging in that it requires a significant culture change. In most plants, managers, engineers, supervisors, and foremen are conditioned to hand out congratulations for fixing broken machines. Most probably lack training about the fundamentals of human motivation discussed in this article. When was the last time you saw a lubrication technician congratulated for executing a flawless precision greasing route? When was the last time you saw a mechanic congratulated for assuring perfect tension on a threaded fastener joint? These are the proactive behaviors that must be celebrated (and congratulated on) because they drive reliability.

PUTTING MOTIVATION ON THE PLANT FLOOR
To manage culture change in the area of rewards, you’ll need to train plant leadership on the fundamentals of human motivation, as it pertains to plant operations and reliability. Keep in mind, however, that training isn’t enough. You must commit to coaching and mentoring plant leaders to create a sustainable change, i.e., “a new business as usual.” You’ll also need to develop metrics that drive and reinforce proactive behaviors given the fact that what gets measured gets rewarded and what gets rewarded gets done! I’ll be discussing proactive active metrics that drive proactive behaviors in a later issue of The RAM Review.TRR

ABOUT THE AUTHOR
Drew Troyer has over 30 years of experience in the RAM arena. Currently a Principal with T.A. Cook Consultants, he was a Co-founder and former CEO of Noria Corporation. A trusted advisor to a global blue chip client base, this industry veteran has authored or co-authored more than 250 books, chapters, course books, articles, and technical papers and is popular keynote and technical speaker at conferences around the world. Drew is a Certified Reliability Engineer (CRE), Certified Maintenance & Reliability Professional (CMRP), holds B.S. and M.B.A. degrees, and is Master’s degree candidate in Environmental Sustainability at Harvard University. Contact him directly at 512-800-6031 or dtroyer@theramreview.com.