So, How Well Do You Know Your Grease Gun? 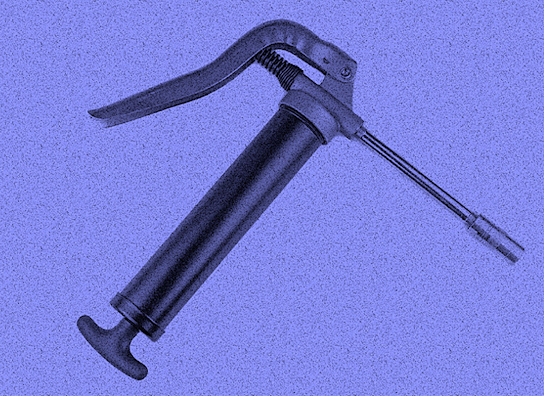 The reality is many grease-gun operators have never been properly trained on how to correctly fill a grease gun or determine its output or pressure. And, since the majority of these devices are now being manufactured offshore, they rarely come with any specification sheets or quality instructions. Here, let’s examine some best-practice user fundamentals associated with these lubrication workhorses.

Most of the grease guns that are purchased these days use grease cartridges. To load a new cartridge correctly:

1.   Wipe the grease gun clean with a lint-free rag.

2.   Unscrew the grease gun head from the barrel and place on a clean surface or clean paper towel.

3.   Firmly hold the grease barrel in one hand and pull back the rod handle at the end of the barrel with the other hand until it can go no further and lock into position. NOTE: Depending on the rod style, it may have a friction-lever lock built into the end of the barrel that automatically holds the rod in place when extended. Or, the barrel end may have a slotted hole that requires the extended rod to be positioned across the slot into the locked position.

5.    Place the barrel next to the head on the clean surface.

6.    Ensure the new grease cartridge is filled with the same grease as the old cartridge. If not, the grease gun will need to be thoroughly degreased and cleaned to ensure bearings are not cross-contaminated with two different greases.

7.    Pull the plastic end cap off the grease cartridge and insert the cartridge into the grease-gun barrel open end first. Once fully inserted, remove the pull-tab foil end off the cartridge.

8.   Fully screw the grease gun head back on the barrel and back off (loosen) one turn.

9.   Release the rod handle by pushing the friction-lock lever or returning the lever rod back across the slot to its center position, then slowly push the rod back in place in the barrel, as far as it will go.

10.  Pull the trigger, or pull/push the lever until grease begins to dispense, then securely tighten the gun head.

12.  Wipe the grease gun clean with a lint-free cloth, and then be sure to place all spent materials in a contaminated-waste container for removal.

Some grease guns have a dual-fill feature, whereby the barrel can accommodate a standard grease cartridge or be bulk loaded. For such guns and those designed specifically for bulk loading:

1.   Wipe the grease gun clean with a lint-free rag,

2.   Unscrew the grease-gun head from the barrel and place on a clean surface or clean paper towel.

4.   Alternatively, the barrel can be hand-packed from the open end with the rod extended and locked. NOTE: This type of fill can be very messy and is prone to dirt and air inclusion.

5.   Fully screw the grease-gun head back on the barrel and back off (loosen) one turn.

6.   Release the rod handle by pushing the friction-lock lever or returning the lever rod back across the slot to its center position, then push the rod back in place in the barrel, as far as it will go.

7.   Pull the trigger, or push/pull the lever until grease begins to dispense, then securely tighten the gun head.

9.   Wipe the grease gun clean with a lint-free cloth, and then be sure to place all spent materials in a contaminated-waste container for removal.

OUTPUT & DELIVERY MATTERS
A grease gun is an inherently simple design based on basic hydraulic pump principles. Depending on your device’s internal design, a few strokes of the trigger or lever can produce an astounding level of delivery pressure (ranging from 2500 psi up to 15,000 psi). With that type of output pressure and lack of grease-delivery knowledge and discipline, it can be easy for an untrained grease gun operator to destroy bearing seals and over-lubricate bearings, which, in turn, can result in premature bearing failure and downtime.

Sadly, grease-gun-output pressure is rarely stamped on these devices. A simple pressure-test rig can be constructed using a fixed 20,000-psi hydraulic gauge connected to a grease fitting. Connect the grease pump to the fitting and perform a “dead head” pump to see and then record the generated pressure.

To measure the grease-pump-delivery output, purchase a test tube marked in cubic centimeters or cubic inches, and pump in 10 shots of grease (One complete lever or trigger cycle equals one shot). Divide the total amount shown in the test tube by 10 to arrive at the actual shot size. For example, if the test tube showed 27 centimeters of grease, the actual shot size would work out to 27/10 = 2.7 cc. (Pneumatic- and battery-operated grease-gun shot size can be calibrated the same way or by hooking these types of devices up to a flow-metering device.)

NOTE: Grease guns aren’t all built to the same design specifications. Therefore, their displacement-output volumes, or “shot” sizes, will likely be different. This poses enormous problems for a plant when a PM task calls for 2 shots of grease and the guns used at the site haven’t been standardized. Keep in mind that 2 shots of a 3-cc-displacement gun will deliver six times more lubricant than 2 shots of a 1/2- cc-displacement gun.

Some grease-gun manufacturers confuse the delivery-output issue by marketing grease-gun-reservoir capacities and “shot” displacement by weight (in grams and/or ounces). Grease manufacturers, on the other hand, use different ingredients and formulations for each grease type, which results in different specific-gravity ratings and weights. This means that similar volumes of grease can have totally different weights. As an example, greases can be marketed in a standard grease-gun cartridge with the same volume, but one cartridge might weigh 300 grams, while another weighs 400 grams. Bearing-fill cavities are measured in volume, not weight. Therefore, always use volume displacement as your grease unit of measure.

Finally, once a grease gun’s pressure and shot size are known, it’s important to print out a tag with that information and attach it to the gun.

CLEANING & STORAGE PRACTICES
After a grease gun has been put to good use, it should be cleaned and made ready for its next assignment. Be sure to store it vertically in a grease caddy. These types of caddies can be magnetized to your toolbox or metal cupboard or screwed to a wall. This type of vertical storage will ensure your lubrication workhorse remains free of damage, dirt, and, very important, cross-contamination from other grease guns.TRR