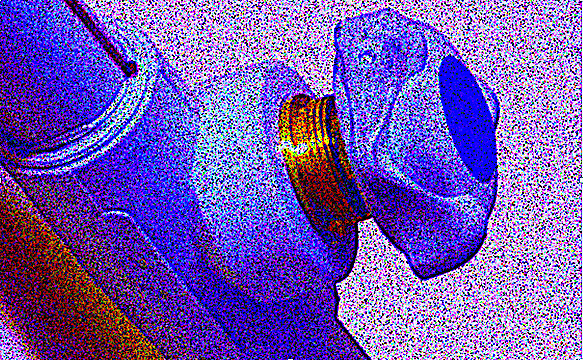 Compressed-air systems are an important part of most plant operations. That said, these systems have typically been the most inefficient utility in plants. Even in a well-maintained compressed-air system, to operate a one-horsepower air motor, you generally need seven to eight horsepower of electrical power into the compressor. At higher than typical air pressures, even more electrical power is needed. This article discusses the impact of maintenance-related issues associated with these systems, as well as methods for dealing with that impact through proper maintenance practices.

Leaks and other maintenance-related issues can have a more serious impact on the energy performance of a facility. A typical plant that has not been well maintained will likely have a leak rate in excess of 20% of the total compressed air production capacity. Proactive leak detection and repair can reduce leaks to less than 10% of compressor output.

In addition to being a source of wasted energy, leaks can also contribute to other operating losses. Leaks cause a drop in system pressure, which can make air tools and other equipment function less efficiently, adversely affecting production. By forcing the equipment to cycle more frequently, leaks shorten the life of almost all system equipment including the compressor package itself. Increased running time also leads to additional maintenance requirements and increased unscheduled downtime, in addition to unnecessary increased compressor capacity.

Since air leaks are almost impossible to see, other means must be used to locate them. The best way to detect leaks is to use an air born ultrasonic detector, which can recognize the high frequency hissing sounds associated with air leaks. These portable units consist of directional microphones, amplifiers, and audio filters, and usually have either visual indicators or earphones to detect leaks. Another simple method, but more time consuming, is to apply soapy water with a paint brush in areas being inspected. Additional methods include smoke sticks, candles, foam, manometers and stethoscopes.

For confirmation of impact, technologies such as Electrical Signature Analysis can be used to measure reductions in consumption in addition to the identification of defects within the compressed air system itself.

CASE STUDY PLANT: CORN MILLER
In 1999, we headed up the University of Illinois’ Energy Resources Center (UIC-ERC) food-processing survey, which included a corn miller located in the central part of the state. During the survey of this facility, several common issues were uncovered, including:

Impacts and measurements associated with these conditions are highlighted here.

Packaging-Line Findings
A number of issues were identified within the compressed-air system at the starch and gluten plant. They included: an air-pressure drop from 110 psi to 45 psi from the compressors to the end of the packaging line, measured at the air regulators; the compressors did not have an opportunity to unload; compressed air was also being used for the plant’s bag houses; and there was no overall compressed air strategy.

Among other things, two 150-hp. electric motors were running in two compressors in the starch and gluten plant. During the course of the study, they were monitored and found to operate at 90kW with one motor, and at 130kW with the other motor. Of those two motors, the first was found to be 73.8% loaded; the second was 106.7% loaded. Both compressors remained online for the 48 hours of monitoring. and the system was found not to unload. Total input power of the compressed air system was found to be 220kW. Due to pressure drops and air demand, the plant planned to install an additional air compressor.

Through a basic walk-through of the compressed-air system, several areas of opportunity were identified: A complete understanding of the system’s demand side seemed to be lacking. The bag-house air lines were not found and traced for air leaks.  And there was a significant pressure drop across the packaging line from (100 psi to 45 psi). For the purposes of this article on compressed-air opportunities, we’re focusing on the packaging-line problems, and providing general recommendations for the remaining compressed-air system.

As for the packaging line’s drop in air pressure, during a general walkdown of the line, a number of leaks could be easily heard and felt. The pressure drop had the following estimated impact:

Based on a 0.5% change in demand for every psi, the power required to maintain the pressure drop is 60.5 kW (81hp), which is 27.5% of the compressor load. The pressure drop was found to be a combination of pneumatic controls for the packaging line and air leaks. A system for correcting the existing air leaks went a long way towards correcting the losses on the packaging line. The 60.5 kW potential with the following opportunity assuming a $0.10/kWh and $10/kW demand across 6000 hours per year operation and 95% efficient motors: 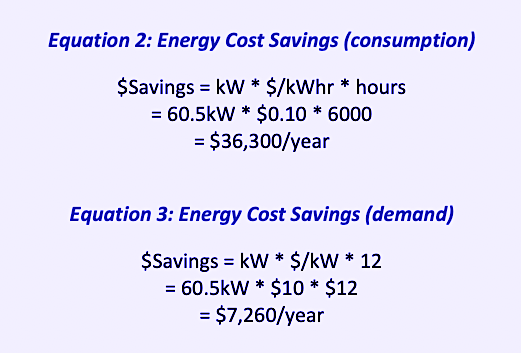 The total potential savings is $43,560 of the actual cost of use, based upon measured motor input of 220kW, which is $158,000 per year, or a potential reduction of 28% of the operating costs and the elimination of the need for a third compressor.

Among the first issues discovered were failed gaskets in the compressed-air lines. One air leak at the compressor end of the production line was estimated to be 3/8 of an inch in size. Other leaks through the system were quickly found audibly. Equations 4 and 5 relate to the losses due to the size of an air leak. Note that there are some online calculators and charts that can be referenced. (Refer to Table I for air-leak-formulae definitions.) 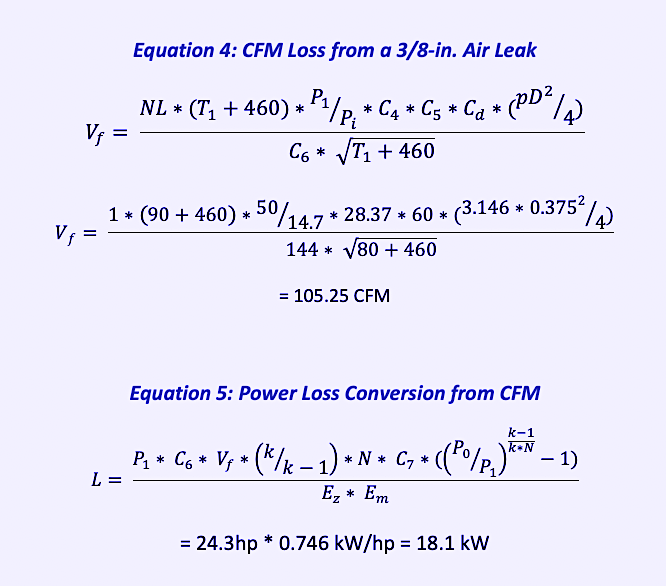 The project team noted that the corn miller could take several other steps before adding compressor capacity, though. They included:

Fungi and Cooking Plant Findings
During the survey of the fungi and cooking plants, three audible air leaks were found in the compressed-air system (two were minor, one was major). These leaks were identified without the use of an ultrasound leak detector.

The source of one these leaks (at the bottom end of one of the fungi tanks) was a ~0.25-in. opening. Using the formulae from this article, this leak put out 140.33 cfm resulting in a 30kW demand and represented $21,600 per year. The source of a second air leak was found to be about the same size. Due to the noise from these leaks, additional hearing protection was required to approach them.

Throughout the first phase of this corn miller study, it was difficult to enter an area immediately below and near the fungi tanks due to the excessive noise. During a second phase, the cause of the noise was identified and determined to be a large separator following a heat exchanger and before the drier on the high-pressure line (150 psi). Based upon the size of the piping, the amount of air, and the position of an open blow-off valve, this opening was conservatively determined to be 0.5 inches at 150 psi. Using the previous formulae, 561 cfm was being lost, accounting for 120 kW demand lost due to the open valve. The total cost, using the numbers in this article, is estimated at $86,400. The primary recommendation for this opportunity was to install an automatic blow-off valve.

Additional Recommendations
Over the course of this site study, additional leaks and opportunities were identified. Here are several recommendations for improving the compressed air system:

CONCLUDING THOUGHTS
The relationship between reliability, maintenance, and production effectiveness cannot be overstated. In this article we provided several examples of the impact of poor compressed-air maintenance practices. While these examples reflected estimated numbers, the actual before and after measurements through implementation were found to be very close. For instance, on the open 150-psi blow-off valve, the valve was closed while inspectors watched kW meters located at the co-generation facility.

Although the actual energy cost numbers for the referenced facility have not been presented here, real numbers for consumption and demand will point to significant impact, in particular with compressed air systems. In fact, in many facilities, even the silent air leaks can justify a majority of an air-leak program, including instruments and personnel.TRR