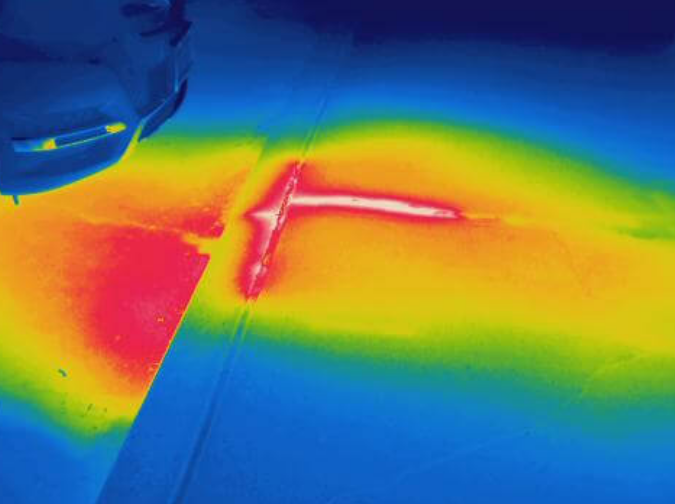 Leaks are a common problem with underground piping systems. Under the correct conditions, infrared (IR) thermography can help to detect evidence of leaks from buried piping systems that carry hot or cold product.

When a leak develops in a buried piping system, fluid is lost to the surrounding earth. If a leak from a heated or cooled piping system is sufficiently large, a temperature change will occur at the surface of the ground in the vicinity of the pipe leak.

Leaks from buried piping are generally characterized by amorphously shaped thermal anomalies that appear along the pathway of the subject piping system (as shown above and below in thermographic images from infrared inspections of underground steam pipes). 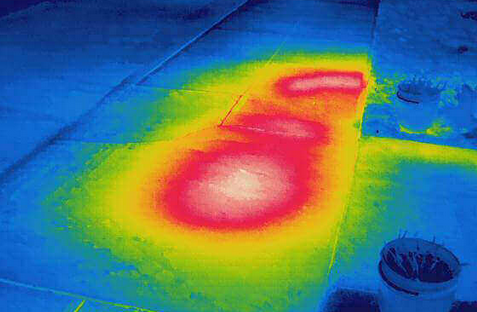 The ability to detect a pipe leak will be influenced by several interdependent factors including, but not limited to: pipe operating temperature, pipe system construction, burial depth, amount of loss, soil type and moisture content, and ground cover.

Infrared inspections of buried piping systems are best performed late at night with calm wind conditions. Inspections may be performed on foot, from a motor vehicle or from an aircraft. Performing the inspection late at night will eliminate the effects of solar loading and solar reflection.

During the inspection, the thermal imager is maneuvered over the pathway of the pipeline. Well-defined straight lines that correspond to the location of the buried lines generally indicate a healthy piping system. Amorphously shaped thermal anomalies that cannot be explained in terms of piping system construction or features may be indicative of pipe leaks and should be marked and subsequently investigated for cause.TRR

ABOUT THE AUTHOR
Jim Seffrin, CMRP, has been an Infraspection Institute Certified Infrared Thermographer since 1984. A co-founder of Jersey Infrared Consultants and a practicing thermographer with 35+ years of experience as an infrared consultant, he was appointed Director of Infraspection Institute in April 2000.  For information on a wide range of topics related to infrared thermography and associated training and certification, visit IRINFO.org and/or infraspection.com, or email jim@infraspection.com.