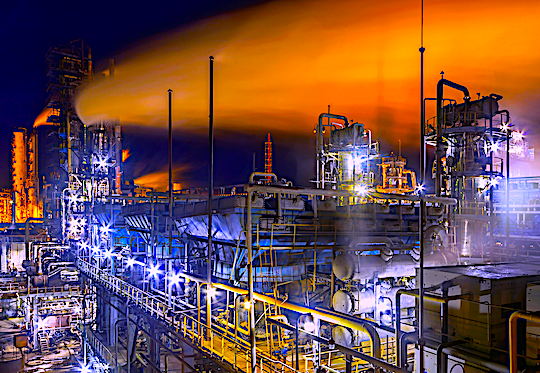 Over the years, I’ve written extensively about what I call “managing FLAB” in the plant. FLAB is both an acronym and a play on words. As an acronym, it stands for fasteners, lubrication, alignment and balance, the foundational mechanical and electrical elements of proactive equipment care. As a play on words, it’s about minimizing excess. At its core, managing FLAB is about managing friction and wear to proactively extend the life of your machines and increase the reliability of your industrial processes. Let’s explore friction from an energy and greenhouse-gas (GHG) perspective.

ENERGY BY THE NUMBERS
Begin with the numbers. The total energy budget for the United States is about 100 quad BTU per year. A quad is a quadrillion (1015) British Thermal Units (BTU) of energy. In more familiar terms, 100 quad is equal to about 30 trillion kilowatt hours (kWh) of energy consumed in the U.S. each year.

According the U.S. Energy Information Agency (EIA), about one-third of that energy is utilized by the industrial sector. Assuming an industrial cost of about $15 per million BTU, which is about $0.05/kWh, the industrial sector spends about $500 billion on energy each year. Numerous reports by the U.S. Department of Energy (DOE) suggest that we’re currently wasting about 22% of the energy utilized as compared to current state-of-the-art best practices.

The good news is with some R&D investment in energy-utilization technologies, we could practically cut our industrial energy consumption in half. To put that in economic terms, we could eliminate more than $100 billion of cost per year from our aggregated production budgets by applying state-of-the-art energy-management best practices. This is a huge opportunity.

Consider the bulk-chemical-process industry: It’s the largest consumer of electricity at about one trillion kWh equivalent (kWh-e) units of energy per year. According to the DOE, energy consumption in this segment could be reduced by 22.3%, to just over 800 billion kW-e per year, by utilizing current state-of-the-art energy management practices (based upon 2015 numbers).

With R&D investment, the DOE estimates that energy consumption in the bulk-chemical industry could be reduced to less than 400 billion kWh-e per year (based upon 2015 numbers). Implementing current state of the art best practice, energy management practices would have boosted 2015 industry-wide profits by nearly $40 billion, in a year when total industry-wide sales for bulk chemicals in the U.S. was about $800 billion. The opportunity is relatively similar for all industries that the DOE studied.

COUNTING THE CARBON IMPACT
If increasing profits aren’t enough to motivate industry, there is a major carbon-reduction play associated with improving industrial energy efficiency. According to the formula created by the U.S. Environmental Protection Agency (EPA), we emit 0.707 kg of carbon dioxide-equivalent (CO2-e) units for every kWh-e of energy consumed based upon the average for all forms of energy consumed. At current consumption levels in the U.S., industrial operations produce about 2.2 billion metric tons (mt) of CO2-e per year. By implementing current state-of-the-art industry best practices for energy management, we can reduce the industrial carbon footprint by nearly 500 billion mt of CO2-e. That’s enough to offset the annual personal carbon footprints of 25 million Americans. Implementing the practically achievable reduction in energy would cut the industrial carbon footprint in half and offset the annual individual impacts of 55 million Americans. That’s more than 15% of the total population.

TRIBOLOGY GETS US 1/3 OF THE PRIZE
Professor H. Peter Jost coined and defined the term “tribology,” the science and engineering of interacting surfaces in relative motion. Tribology includes the principles of friction wear and lubrication.”

In Prof Jost’s seminal report on the subject to the government of the United Kingdom, he estimated that avoidable and non-productive friction results in energy waste of about 7.5%. My 30 years of experience as a reliability engineer have shown me that Prof Jost was about right. Moreover, and the opportunity that he delineated in 1966 is still available to us today.

Most of my career has been dedicated to proactively managing and reducing parasitic frictional losses by focusing on FLAB elements. Historically, the objectives for my efforts to reduce friction were to reduce wear, extend machine life, and increase production reliability. I’ve treated energy usage and efficiency as a positive externality. Yet, although I only recently have begun thinking about carbon impact in the equation, I do know this: Climate change represents an existential threat to society in the U.S. and around the world. Those of us working in the RAM arena can do something about it.

THE WIN-WIN-WIN PROPOSITION
Once in awhile, an opportunity is so sweet that it simply can’t be passed up. Reducing energy consumption by minimizing non-production frictional losses in industrial equipment is one of them. It offers us a triple play of improving equipment reliability, reducing energy and maintenance costs and reduces the plant’s carbon footprint. And, it’s primarily about doing the basics of machine care right. Let’s get started!TRR

ABOUT THE AUTHOR
Drew Troyer has 30 years of experience in the RAM arena. Currently a Principal with T.A. Cook Consultants, he was a Co-founder and former CEO of Noria Corporation. A trusted advisor to a global blue chip client base, this industry veteran has authored or co-authored more than 250 books, chapters, course books, articles, and technical papers and is popular keynote and technical speaker at conferences around the world. Drew is a Certified Reliability Engineer (CRE), Certified Maintenance & Reliability Professional (CMRP), holds B.S. and M.B.A. degrees, and is Master’s degree candidate in Environmental Sustainability at Harvard University. Contact him directly at 512-800-6031 or dtroyer@theramreview.com.