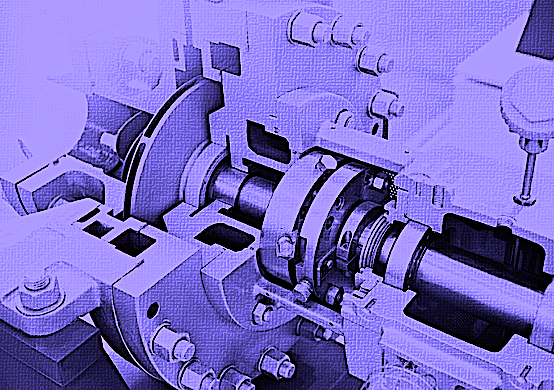 You will probably have worked with some equipment and component suppliers that saw no reason to offer you upgraded components. Perhaps your seal vendor was among those that were quite happy with the status quo. Such sellers link their growth to numbers of products sold and profits realized; they like things as they are. Since they think end-users are mainly interested in buying products from the lowest bidder, they have little incentive to invest in machinery needed for use with
advanced manufacturing technologies, including surface-treatment methods proven to extend component life.

CONSIDER LASER TEXTURING
Years ago, laser surface texturing became an emerging technology for reduced friction and improved mechanical seal technology. This texturing produces thousands of micro-pores on one of the mating seal surfaces. Each pore acts as a miniature hydrodynamic bearing creating a tiny separating force that reduces the intensity of contact between mating surfaces. It reduces friction and thus face temperatures, resulting in extending seal operating time.

I recall a conference exhibit demonstrating Surface Technologies. Companies such as Fusion, Valence, and Praxair have solved some rather elusive sealing problems. The results of field testing are impressive, and years of successful applications at consumer-product facilities, petrochemical plants, power-generating facilities, and pumps on shipboard have been fully documented. Surface Technologies Ltd, Valence, Praxair. Sulzer, and many others have shown that application of surface- texturing to piston rings and rider bands in reciprocating compressors and engines will prove similarly beneficial.

Years ago, laser surface texturing became an emerging technology for reduced friction and improved mechanical seal technology. This texturing produces thousands of micro-pores on one of the mating seal surfaces. Each pore acts as a miniature hydrodynamic bearing creating a tiny separating force that reduces the intensity of contact between mating surfaces. It reduces friction and thus face temperatures, resulting in extending seal operating time.

So, you might ask, what’s your role in this? After all, you’re with an end-user company, not a mechanical-seal or piston-ring manufacturer. Well, here’s the point. Fluid-machinery manufacturers and others will frequently blame the purchaser for lack of progress or reluctance to change. On several occasions, we were told that the overwhelming majority of pump purchasers are evaluating bids largely on the basis of initial cost and give no credit for better components, or a more maintainable design. At least that’s what we heard from pump manufacturers for many years when we pointed out that they could build better pumps.

We’ve recently seen that the same holds true for bearing selection. “Cost conscious” U.S. purchasers looking at nothing but price have been known to buy surplus and over-age bearings from overseas sources. When these bearings find their way into critical pumps and/or other process machines, reliability can be severely compromised. No amount of money “saved” in the purchasing of substandard bearings or less than best available mechanical seals is worth the risk of failure.

SO WHAT?
Again, understand your role in becoming the market driver. Explain to the component manufacturer that you are interested in extending equipment life and would like an answer as to the merits of laser surface texturing, and other types of advanced technologies. Examine your worn reciprocating compressor piston rings and rider bands. Could the rate of wear have been reduced by laser surface texturing? By other modern technologies?

Could you, perhaps, explain to your purchasing department that a pump-repair event attributable to a bearing failure can cost  your plant several hundred times the incremental cost of a better bearing? Indeed, asking pointed questions and adopting a pro-active stance could lead to valuable machinery-life extensions. Become familiar with these questions and raise them at the next opportunity.TRR